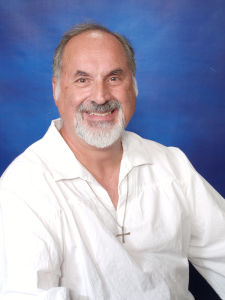 The Reverend Peter Edward Lanzillotta, Ph.D. is a transplanted New Englander. A native of a small town near Plymouth Rock in the greater Boston area of Massachusetts.He received his early academic training at Boston University, Roger Williams University, Suffolk University, and Andover-Newton Theological School. Later he earned a certificate in Spiritual Formation at the Shalem Institute in Washington, DC..  In 1995, he completed his doctorate in Theology and Spirituality at Greenwich University, School of Theology in London, England.

While at State College, he initiated a community wide response to the tragedies such as Littleton by forming an interfaith coalition against prejudice and violence. It was an interfaith group that worked cooperatively with advocacy and non-profits groups, the school system, and the police to assist the public in promoting greater understanding, compassion and safety.

Peter may be unique within liberal religious circles because he holds a second ordination as an Independent Catholic priest. As part of his personal quest for deeper meaning, and as a result of experiences in spiritual formation and his doctoral research, Peter received additional training and education and since 1998, he has been affiliated with the White Robed Monks of St. Benedict.

Trained as a theologian, he prefers an interfaith or inclusive approach to religion and to spirituality. Having experience in liberal Protestant churches and independent Catholic parishes, he seeks to find unifying values in both Eastern and Western thought. One of his mentors, Matthew Fox, founder of the modern understanding of Creation Spirituality, sees the new definition of ministry as being “post-denominational theologians” or as being  “priests of the new paradigm”.

As a householder, Peter enjoys organic gardening, learning how to cook healthfully, tennis, Tai Chi, and he is valiantly trying to learn how to dance better!  As a self-described “Renaissance man”, Peter sees himself as an Italian “Fiddler on the Roof”–one who is trying to keep his balance, who is learning to enjoy life’s insecurities, and seeking the grace and wisdom it takes to dance through each day’s challenges.

Peter brings his more emotional and open-hearted approach to the interfaith and inclusive ministry in a way that honors and preserves the past while enthusiastically embracing change. His view of life is that one risks in order to transform, and that one learns to embrace paradox so that all the opportunities for growth, awareness and understanding that the future holds will not pass him by!

Over the past thirtyyears, Peter has performed a large number of weddings and remembrances. Each service has its own unique opportunities, challenges, requirements and rewards., In each case, he brings his open-minded and open-hearted approach to what is being asked of him.

The birth or adoption of any child is a life changing event. It can become a memorable experience of affirmation and blessing that welcomes that child into our human experience, and that surrounds the child with love and acceptance. Personally, and theologically, Peter does not adhere to the orthodox beliefs about original sin, depravity, or moral corruption that necessitates an infant baptism. Instead, he prefers to emphasize the potentials every child has, and promises we make to our child as their parents, mentors, and extended families… He sees a christening or a dedication as the unfolding of the human spirit that will embrace their identity as a planetary citizen, as a creative contributor to the betterment of our world…

While he is willing to accept and perform the traditional services, Peter prefers to design services of remembrance so that it becomes a celebration of that person’s life, and an affirmation of the virtues and values that person had shown to others, and instilled in her/his family. We are made immortal by the gift of memory… and as long as memory survives, we can recall those who have died with reverence and gratitude. Peter often designs memorial services to reflect the personal beliefs of the deceased and will invite the music, poetry, and readings that reflect on that person’s outlook on life. As a part of each memorial, he welcomes those family members and friends who would like to share a brief personal story, and who would offer a last statement of grief and gratitude, sadness and thanksgiving that expresses the importance and impact of that person on their lives…

Memorial and funerals are designed to take place in funeral homes or churches, at back yard gatherings, or on the beach, etc… Simply put,  wherever it would be fitting and meaningful for the family and friends to gather… . Peter would also offer a brief interment service if that was the wish of the surviving family…

For the last thirty years, I have been involved in assisting people to find their own best answers; First, as a psychotherapist whose primary experience was in marriage and family issues, and in drug and alcohol concerns, then Second, through my years of liberal ministry. Additionally, since 1989, I pursued and completed training as an interfaith spiritual director, and will complete my certification as a life coach this Fall.

Looking back, my approach has always contained a pastoral quality about it. My concern for the whole person is also a continuing theme as the well being of the person as mind/body/spirit acting as an interdependent unity has been foremost. I feel that I was an informal pioneer in these modalities and outlooks before the “New Age” emphasis became more socially popular or before it was more prevalent in our cultural awareness.

My understanding of a more philosophical and spiritual basis for coaching and for spiritual direction is that they are distinctly different from psychotherapy, and  not to be considered as a replacement or as a substitute for deeper levels of therapeutic or professional advice. The emphasis is on encouraging a client to find their own best answers to their soulful questions. He will be glad to refer anyone to the appropriate professionals based on their situation they describe, or the need they might have for in depth investigations or medication.

When assessing my coaching and spiritual direction experiences, I seek to address the hunger for meaning, or purpose and this involves a more complete regard for the whole person that includes an active and aware spiritual identity. From the perspective of the great wisdom and faith traditions, East and West, I draw my resources and share them to inform my clients of how the timeless traditions can and often do directly impact on their problems and their perceptions of their life and its challenges.

Spiritual formation or spiritual direction is the over-all term used for the person who has been trained to assist others along their religious journey, or their spiritual search.

Its process involves the individual in finding and exploring those values, principles and ideals that are most meaningful and powerful in your life. One of the goals is to help the individual to see how holding those ideals and values has an important impact on the depth and direction of their lives.

Spiritual Life Coaching and Interfaith Spiritual Direction are similar to the counseling process of dialogue and discussion, yet, it involves the recognition that there is a trialogue from which meaning and insight comes to us… That third dimension, the workings and gleanings of the Spirit, is a dimension we all possess, yet it often has to be summoned, awakened, enlivened within us.

The less formal definition of this working relationship is to be another person’s “soul friend”, or to be a spiritual companion. With much initial and ongoing success, I have offered these services to those contemplating their spiritual sense of self, and how their understanding of themselves as a spiritual being relates to every facet of their lives.